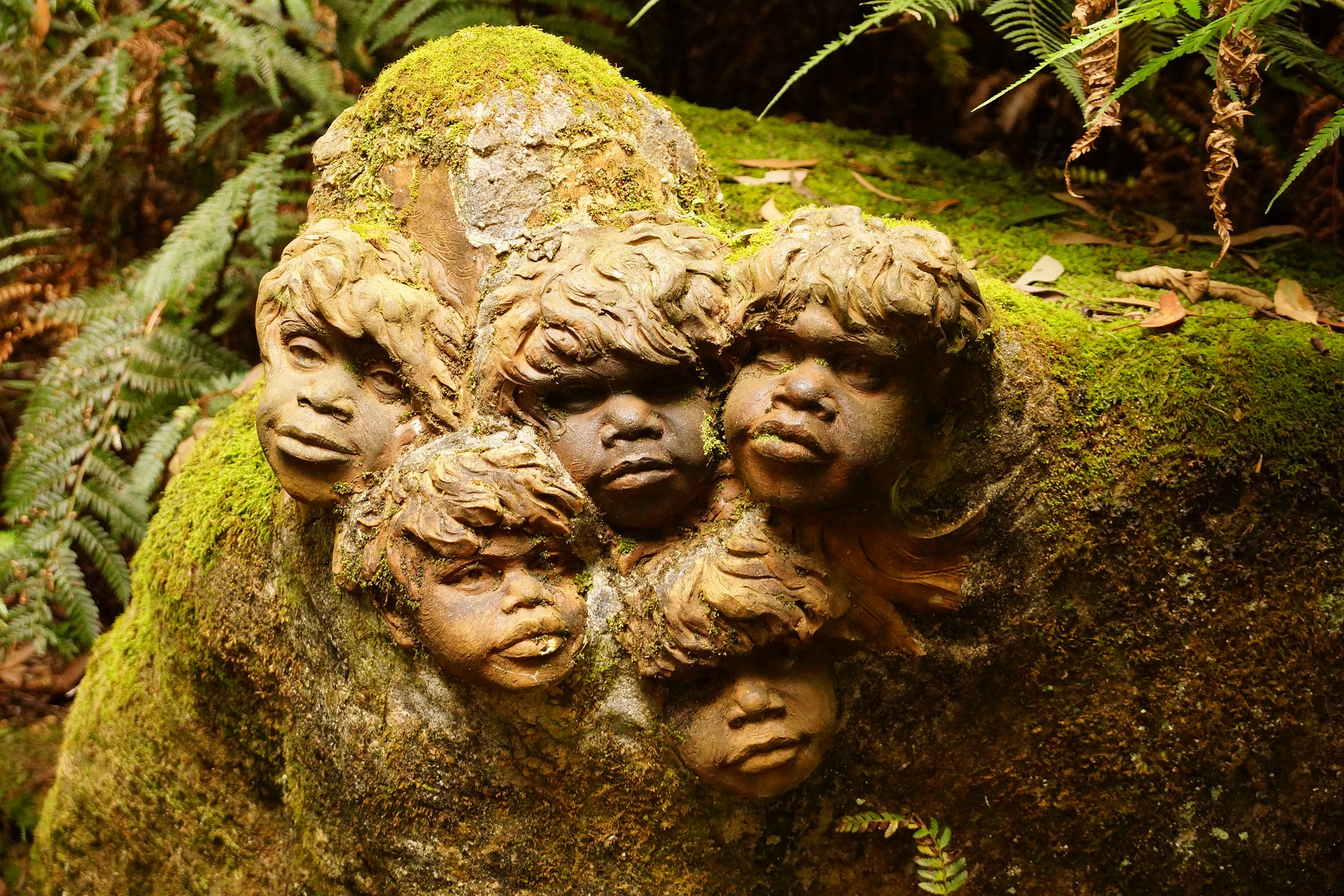 Aboriginal Art
Symbols were a Part of Aboriginal Art to Communicate the Story of the Lives
Art is an important part of Aboriginal life, being connected to the land and religious beliefs, and painting on bark is their oldest type of art.  The Aborigines have been producing visual art for thousands of years, like ancient engravings and rock art, bark paintings, wooden sculptures, and more recently contemporary paintings. The creation of artworks by Aboriginal artists is nearly always connected to Dreaming stories; stories about the land, the stars and the environment. A good question to ask may be; How old is contemporary aboriginal art? To curb the curiosity may be a question of whether history can relieve the pressure, for example; How old is ancient aboriginal art?

An exhibition of Aboriginal Art from Australia is featured in this Virtual Field Trip to the Palace of the Legion of Honor, San Francisco, California in the year 2000.

Every Symbol Tells a Story
Aborigine Art symbols are used in different art forms to relate the stories of their history and culture.  Aborigine artists use symbols like curved and straight lines, dots and circles which have different meanings depending on their context. In fact dot paintings came about when the Aboriginal people worried that the White man would be able to interpret their sacred and very private knowledge.  Circles are believed to represent campsites, straight lines between circles are a depiction of routes traveled between camps, a small 'u' represents people sitting, while wavy lines represented water or rain. "There is no written language for Australian Aboriginal People so in order to convey their important cultural stories through the generations it is portrayed by symbols/icons through their artwork". (Artlandish 2019).

Aboriginal Culture Recorded in Rock Art
From ancient times, Aboriginal culture also produced a genre of aerial landscape art, a bird's eye view of the desert landscape. Their culture has also been recorded as rock art; and in fact, ancient paintings in caves show people dressed for some or other ceremony in body decoration, very similar to what is still used today. Ceremonial aspects of the Aborigine's life are the inspiration for much of their art.

Art by Aborigines includes charcoal drawings, sand art, feathers, stencils, thread-cross strings on poles and carvings. A naturalistic- or figurative style means that the art is recognizable; you can see what is being depicted. Beautiful naturalistic art style is found in rock art across northern Australia, and some of the best areas to see this is the Kakadu and Kimberley areas. And the artists have a supporting art centres.

A type of this art form is where the internal anatomy of an animal is shown in the painting, known as x-ray art. The x-ray style of Australian Aborigine art was developed thousands of years ago and cave paintings have been found in Arnhem Rock, depicting the outline of the animal with diagrams of the internal organs. This type of art is produced today on bark and paper and made available to tourists. Ancient Art Forms have been Adapted Somewhat to Modern World.

Today, indigenous artists work with modern materials such as canvas and acrylics to create beautiful visual effects of their survival over thousands of years and in challenging conditions. Aboriginal artists, known as The Western Desert painters, have adapted their tribal art forms to the western world, making use of western materials and techniques, but still keeping the subject matter in keeping with stories passed down by tribal ancestors. What about; "11 Of The Hottest Aboriginal Men And Women".

It was in 1934 that Australian Rex Batterbee, taught Aborigine artist Albert Namatjira Western style water color landscape painting. It became a hugely popular style, and actually sold out at an exhibition in a few Australian cities.  With his new-found fame with these paintings, Namatjira became the first Aboriginal Australian citizen. Finally, this time; How do they keep the art and culture so strong?

"The Dreamtime is a term that describes unique stories and beliefs owned and held by different Australian Aboriginal groups. The history of the Dreamtime word and its meanings says something about the development of the ideas held about the Aboriginal world, and how they are expressed through art.

Jukurrpa is one traditional term used by several groups of Central Desert languages to describe what could possibly be seen as the religion and the Laws of the people, and in some ways a description of Reality.

In that sense, traditional Aboriginal people believe that the world was created by Ancestor Beings. The spirit of the Ancestor Beings remains in the country, in the animals and the places and the people of that country as an ongoing presence." Aboriginal Dreamtime Stories

"Tens of thousands of years old but also contemporary, Indigenous art is thriving

Aboriginal and Torres Strait Islander art is thriving. It is dynamic, rich and prolific. Lovely sculptural pieces, rich paintings on bark, acrylic paint on canvas, fabrics – it is tens of thousands of years old but also contemporary.

The stories are still strong and our ancestors are still teaching. And there is an art market that is appreciating the beautiful and diverse artwork that we have as part of our heritage. As an Aboriginal person who has seen the development of the culture and the art over the last 40 years, I’m incredibly excited by the state of the industry." The Guardian.