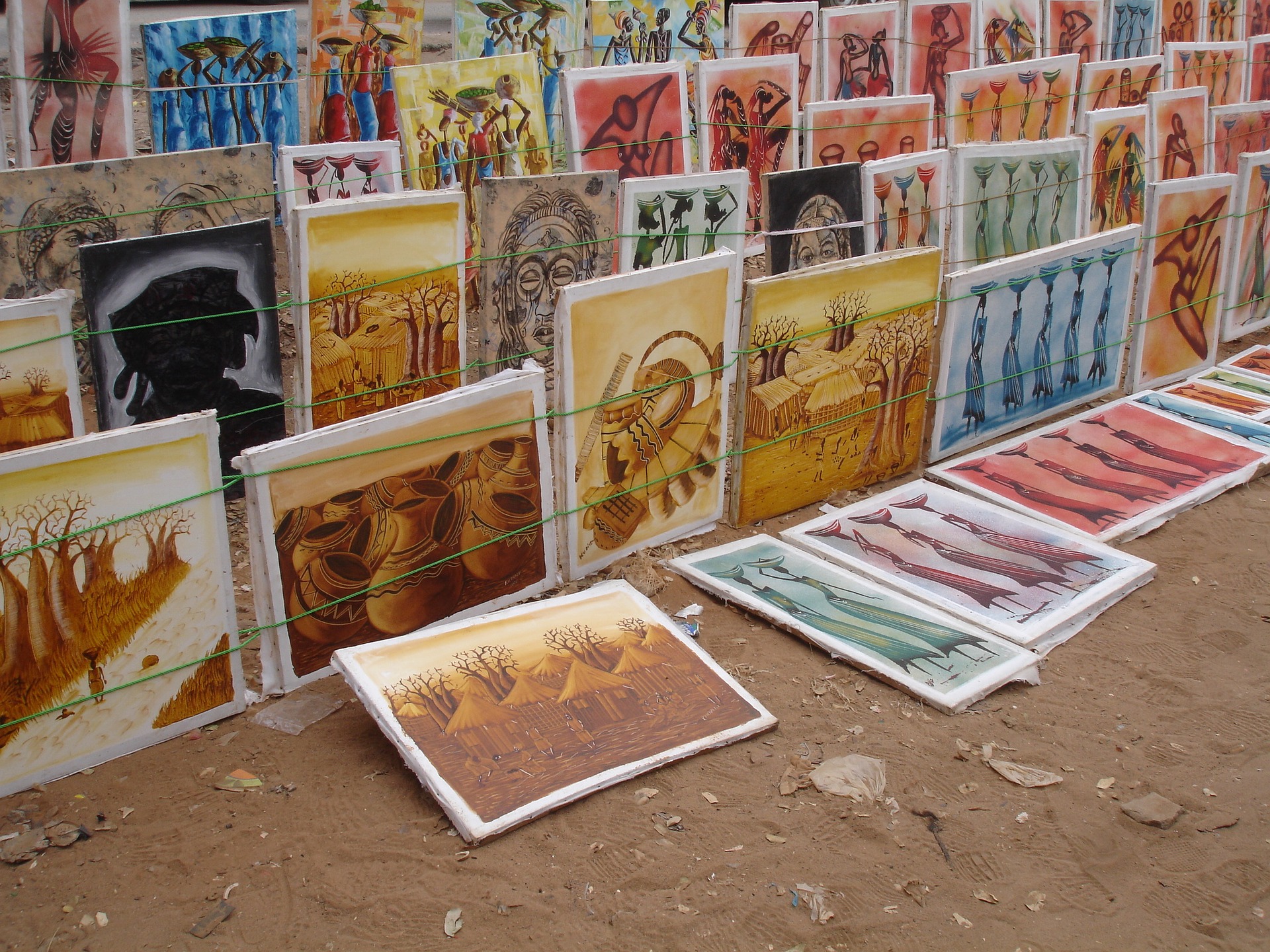 Angola is one among the culture rich countries of the world tracing the roots to the traditional heritage of Angolians. However, the Angolian art hasn’t been much explored and requires a massive boost in form of support. This work has already been initiated recently by the Angolan Ministry of Culture. The beautiful art works from Angola received a lot of adoration and compliments at the 55th edition of the Venice Biennale.

Video: Angola; People, culture, and its riches. The expensive Luanda

Angola also won the prestigious Golden Lion award at its maiden display of artistic works at the art Olympics. Despite competition from the cultural giants in arts like the France, Italy, Germany and Romania, Angola ended up next to Germany for the top honor for best pavilion.  The end of civil war brought in lot of transition in the artistic styles employed in Angola and this led to the birth of contemporary artists expressing their deeper thoughts and feelings on the canvas. Antonio Ole and Paulo Kussy are amongst Angola’s most admired and world-renowned artists.

Civil war brought in explosions of creativity within the artists and gave them the necessary encouragement to express themselves. Ole has created masterpieces inspired by themes such as civil war, famine, colonization and social conflicts. Paulo Kussy is a plastic artist and produces artist pieces with assorted motifs. His art work majorly reflects human body. His fascination is reflected in his artwork. His art show with the theme “Skin Peeling” has brought him plenty of accolades for his hard work.

Thus, Angola attained official independence on 11 November 1975 and, while the stage was set for transition, a combination of ethnic tensions and international pressures rendered Angola’s hard-won victory problematic.  As with many post-colonial states, Angola was left with both economic and social difficulties which translated into a power struggle between the three predominant liberation movements. (South African History | Online, 2019).

Angola lacks facilities to prepare young artists but the initiatives by the Angolan Ministry of Culture shall very soon revolutionize and stun the art community by the depiction of their hidden talents. The mysteries of Angolan art have been tried to explore. The Total foundation joined hands with the Dapper Museum in Paris to set up the art exhibition titled “Angola: Figures of Power”. Around 140 art works were displayed covering thrones, altars, marks and scepters.

The exhibition took place in November 2010 and was the first time ever such huge focus was on Angolan fine art work. Overall, the Angolan art work majorly reflects the societal influences and the intercultural influences. Majority of the painting themes were war and weapons. The paintings of Antonio Ole reflected the contemporary art by offering a modern outlook depicting rebuilding, development and transition from the dreadful traces of civil war to the modern developing Angola.   Several art institutions are emerging in Angola.

Even art galleries have come up to promote the work of young artists. The Humbi-Humbi gallery and the SOSO Contemporary art gallery in Luanda are attracting a lot of visitors lately. The Portuguese Cultural Centre and the Museum of Angola are frequently housing a lot of contemporary exhibitions. The sculpture of Chowke and the African rock art provides a deeper understanding of the Angolan history. The paintings and engravings on the rocks give an indication that the birth of art work in Angola traces its origin to the prehistoric times.  All in all, the evolving Angolan art has grabbed the attention of the art lovers all over the world.

Art and Culture in Angola
The Portuguese and the African mix of the blend of the humanity in the land of Angola. The Portuguese have left a lasting impression of their language, tradition and way of life in this part of Africa which is geographically in two different continents of the earth. The world does not change often, this is because from time immemorial in the annals of the world history we find the art forms and the language remains forever in a culture with some additional inputs, the Angolan culture reflects this idea.

Art in International Relations
"Art can leave an impact on international politics by offering inspiration and perspective to relations between peoples of different nations and life experiences. It can furthermore “re-enchant” the world as humanity faces many critical challenges, such as threats to peace and security; widespread and massive violations of political, civil, social, and cultural rights; and the deterioration of the biosphere.
The most direct and easily perceptible contribution of art to international relations is of an instrumental nature, where art is deliberately used to obtain certain objectives such as awakening a sense of patriotism, or stirring people’s emotions to take action against a perceived problem. Art also has an extrinsic value in international relations, where the knowledge, ideas, inspirations, and sympathies of international political relevance that can be derived from a work of art by the discerning reader, listener, or observer." (Oxford Research, International Studies, 2019).

How can the Role of Arts and Culture reach International Relations and Diplomacy
"It is a great pleasure to be with you here today. As the head of the European Union National Institutes for Culture (EUNIC) in New York, I am delighted to welcome you all to our 41st official EUNIC Forum.
I want to thank the EU Delegation to the United Nations for hosting us and making this event possible.
I hope you’ll agree with me that the Delegation in New York is a fitting venue to gather and explore the unique role art and culture plays in international relations and diplomacy, as a form of exchange to build trust, increase familiarity, and create positive perceptions between peoples and nations." (Medium.com, 2019)

Luanda - National Capital, Angola
"Luanda, also spelled Loanda, formerly São Paulo de Luanda, city, capital of Angola. Located on the Atlantic coast of northern Angola, it is the country’s largest city and one of its busiest seaports. Founded in 1576 by Paulo Dias de Novais and initially settled by the Portuguese, Luanda became the administrative centre of the Portuguese colony of Angola in 1627 and was a major outlet for slave traffic to Brazil. The city is regarded as the capital of the Mbundu peoples, who have their roots in the surrounding area." (Encyclopaedia Britannica, 2019).

"The Resurgence of Ethnic Art in Modern Day Angola, and Other Angolan Cultural Practices.
While many of my previous posts have focused on Angola and its struggle to attain independence, I have decided, in this post, to focus on an aspect of Angola that Americans know little about…it’s culture. In learning about Angola’s culture, I was astonished to find that their culture is not only similar to America’s in a lot of ways, but it is also extremely artistic.

When I say that the culture is similar to America’s, I mean that the culture enjoys similar sports and activities that Americans do, such as football and basketball. Angola’s football association, the Federacao Angolana de Futebol, manages its National team called “Palancas Negras”, or the Sable Antelopes. And its National Basketball Association, or the Federacao Angolana de Basquetbol, manages its basketball team, simply “Angola”." (Pennsylvania State University, 2019).

The euro-African culture prevails in this part of the world the projection of the diversity of the culture is seen in the food, dress, worship and social customs of Angola.  The diversity of Angola is unique in the world besides the official language the are many dialects in use by different ethnic groups. The self-governance of the ethnic caste group is something worth mentioning. Each group has its own leaders and judges to take decisions.

Decision makings is the responsibility of the leader of the ethnic group. It is interesting to see the blacks speak Portuguese just as the native speakers do. The nomadic and semi nomadic settlers in this part of the world engage themselves in hunting and work in the deep woods. The cattle and animal husbandry are the normal way of live in this culture. The Angolan way of life is very much appreciated for having high regards for the women in their communities.

Marriage is done in a legally binding norms and the family units are built on socially sound ethics; child bearing is in abundance there is no restriction of child birth. There is less infant mortality due to healthy food habits they eat pulse wheat oats and meat of animals. The ART of Angola is one of the famous traditions and heritage of Africa. The Art forms are found in the pottery paintings, textiles of Angola.

The world-famous exhibitions held world over will have the rich exhibits of art pieces of Angola. Many artisans make their livelihood in the art of painting pottery metal deigns and drawings in ceramic tiles etc,. Celebrations of different kind and variety has added color in the life of the people they beat drums and other forms of folklore to celebrate festivals. Each ethnic group has their own festival.

Roman Catholicism is the major Religious group in Angola. That the catholic church contributes in the areas of education, healthcare and social development of the different communities. The other protestant mission and Muslims also share a sizable percentage in the life of the people. The current life of the people of Angola is very different from that of the present Portuguese.

Though both the cultures have shared the tradition for four centuries they have undergone a lot of changes over the years, the once colonies of the Portuguese are now an independent sovereign state which is a member state of the UN. The global warming and the global markets did affect the art and culture of Angola like other developing nations. You can no more in isolation but be part of the global village (the World) as it is called. It is very challenging to strict to the culture and different art forms and it needs to be modified according to time and space available to Angolan way of life.

Back from Fine Art in Angola to
Index or Site Map