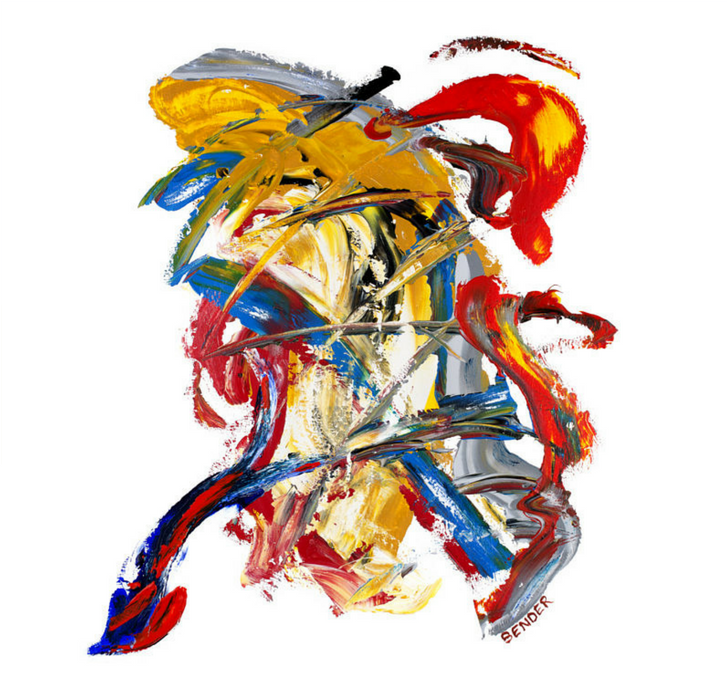 How much can one learn about an artist by looking at his work? A review of painter Bender´s latest pieces reveals a great deal about the artist´s life and energy-charged passion in his painting.

Scenes conveys a sense of peace, while at the same time, Bender´s bold use of color and strong compositional elements convey the intense beauty the artist sees in the world around him, and what`s going on inside. His paintings invite the viewer on a journey behind the surface, behind the image surface, to explore a world that maybe lies far from the everyday life. Or as a gallerist expressed: "there rests an elegance of your paintings".

Bender´s personal journey as an artist began in his childhood. Born in the 1940´s in a small town in Sweden.

When he was 8-12 years, he often saw his father when he sketched and he was always impressed with how it was possible to do as he did. In the age of thirties, Bender had serious thoughts about to educate himself and took a course in drawing, but nothing earth-shattering happened until he was around 40 years old.

Today when he paints it begins usually with a thought or feeling as a part of the contents of a story. Therefore, he try to "penetrate the surface", before his starting to paint. "I try to penetrate behind the "image", beyond the picture, because it is for me where the art is fertilized and emerges".

During 2013, two years after his prostate cancer surgery, and one year after a tumor surgery on his back, he began experiment more and for the first time, he felt truly and genuinely home.  “It's like the novel has opened!  The poetry is starting to emerge and I feel more and more satisfaction and music in my work.  A new generation! 2014 and beyond! Yeah, it feels right now and that gives me a lot of substance, stability and greater depth, and that is what I strive for.”

Art is about life
When he started painting in the 1980's he was caught by the psychotherapist author Alice Miller. A fully sovereign educator and writer, who made the "black pedagogy" more understandable.  He reasoned with himself and recalled this passage from one of her writings  "If that is the case here, then there should also be a certain way in another respect."

He turned the page of “his life” and another page of Miller and there, she herself had offered almost verbatim the wording he came up with “Creating abstract figurations or figurative abstractions.”

It woke him up from his beauty sleep and he began to realize more and more that what he sought, was not primarily to know something about something or to get more knowledge, it was the understanding itself.  More of the understanding in life “phenomena” and how it can be expressed in different ways.

He focused on what sparked his interest and unique point of view at the time, understanding more what he did not understand at that moment.

"If I experiences it, I can more easily relate myself to it, and perhaps to reason with myself about another phenomenon connected.  I can train myself to understand the intricacies I experiences".

“Do you “just” want to know more? Or know why you know more?”  He is more content with himself right now for being able to provide himself with information that will help him obtain more knowledge of his expertise.  Do he understand the same phenomenon to process it further? He´s continually asks himself, therefore, the understanding is a step further.

When he finishes a painting, and in some senses has directed his feelings and thoughts, he hands it over to the viewer.  When a viewer takes on the same painting, he or she has no idea what and how Bender was creating, but somewhere there is a meeting.

"It is exactly in this meeting that “it” achieves greater things".

If Bender is the director/conductor so should the viewer be termed the "actor/orchestra" that which portray and interpret the work.

If he confines himself, and gives his art a title, such as "Blue bike against a white wall”, what do he want to accomplish with this title, Bender says. Is the title a help or just a way to state the fact, it's a blue bike against a white wall?  In his art works, in many cases the titles that are meant to serve as metaphors and are not intended primarily to describe the artwork.  If a painting in combination with the title is too clear, what happens in the viewer's brain?

"In most cases the viewer stay "on the surface" and watch a picture, not a work of art. And I think this is a crucial point if the viewer become a viewer of a picture or a co-creator of a piece of art".

The intention is therefore that the art work in combination with a title, should trigger thoughts and feelings with a viewer.  If the paintings are titled or labelled distinctively "blue bicycle against white wall" it is not likely to induce deep thought.  The intention is that the viewer can use the artwork to teach themselves about something and about himself, not primarily about Bender as an artist or the art work.

Through art, we can also find the "Who's doing what with which effect," and here inside his strokes, the viewers can further develop the understanding through the abstract figurations.  Firstly by detecting the artwork itself and then using these discoveries in our own personal life.

He call his art work: abstract figurations or conversely, figurative abstractions because that´s how he perceives life or different phenomenon many times which curiously seems to be patterned (sometimes chaotically).  It seems pretty abstract at times, or is not possible to grasp or understand immediately.  The same phenomenon often reportedly occurs through the viewer's perspectives.

How can the viewer use the art?
Bender´s desire is to show that you as a viewer can use the arts and individual artwork to make new discoveries about yourself and society.  Discoveries that can lead from knowledge and then onward to better understanding of various phenomena you encounter.
Because you are unique and an individual with personality, your interpretations of a work of art always fit in and adapt to your world, and thus it will meet somewhere your inner world.  You will naturally get help from your own subconscious.  This makes Bender´s pieces, hopefully, so subtly rewarding as they also give you a gifted insight to yourself.

“There is always something to learn.”

Back from Bender Passage to
Resume
Index or Site Map